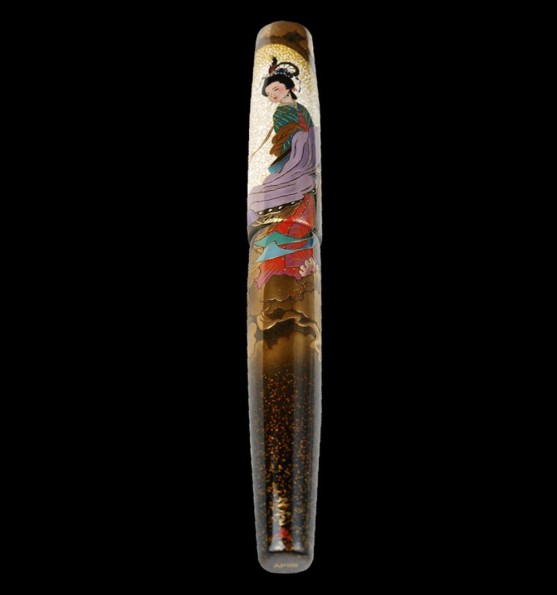 The Connoisseur   MAKI-E ONE OF A KIND FOUNTAIN PEN

AP Limited Editions brings to life the Chinese legend of Chang’e, in this dazzling Maki-e one of a kind rendition of THE MYSTICAL MOON GODDESS.

The legend of the Moon Goddess traces itself to the Tang dynasty of China and a young archer called Hou Yi who was rewarded with an elixir of immortality for the extraordinary accomplishment of shooting down 9 extra suns that were scorching the earth. His beautiful wife Chang’e drank this elixir which caused her body to flow into the sky and rest on the moon. From then on, she was immortalized as the Goddess on the Moon.

There are several variations of this story but they all end the same way with Chang’e finding her permanent abode on the moon. Hou Yi did not abandon his wife. On a full moon night of the eighth lunar month of the Chinese calendar, Hou Yi paid tribute to his beautiful wife in the form of an outdoor altar which she could gaze down upon. This tradition of worshipping the Moon thus came to be part of Chinese culture in the form of the Festival of the Harvest Moon, the full moon that comes closest to the autumnal equinox and that which ushers a bountiful harvest.

AP Limited Editions commemorates the 10th Anniversary of Aesthetic Bay in an exclusively designed Maki-e depiction of THE MYSTICAL MOON GODDESS. You are invited to come together as a family and community and celebrate!