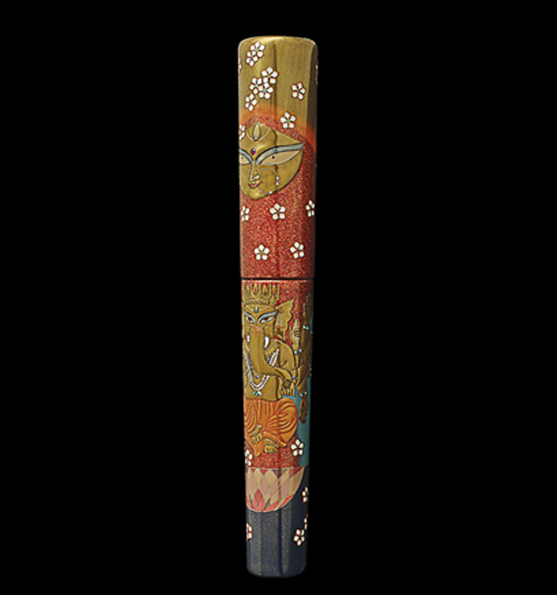 AP Limited Editions presents the essence of WISDOM AND POWER in a stunning Maki-e rendition revealing the mystery behind the birth of Ganesha.

Ganesha’s mother is the Goddess Shakti, the divine feminine energy of the universe, the Goddess of supreme power and the slayer of demons. She is also known as Parvati. Legend has it that her husband Lord Shiva was away from their home on the mystical Mount Kailash which is part of the Himalayas. Parvati was lonely and wished for a child to keep her company and so decided to make one on her own. She willed Ganesha into being and modeled every detail of his physical body into perfection. Baby Ganesha grew up strongly attached to his mother. One day he was instructed by Parvati to stand guard at the door of their home and not allow anyone in. Her husband Lord Shiva returned home after years to see a little boy refusing to let him enter his home. Shiva was enraged and not knowing his own son, cut his head off. At the same time Parvati emerged and was horrified! She revealed how Ganesha came into being to her husband who was stricken with remorse and used his supreme powers to restore the young Ganesha to life. He instructed other Gods and humans to bring back the head of the first human or animal they found. It so happened that the first head found was that of a baby elephant which was fused onto Ganesha’s body.

Mother Parvati was reunited with her beloved son Ganesha. The mystical fusion of the elephant head onto a human body led to a unique combination of the wisdom of the Gods and the intelligence of the elephant. Ganesha embodies the power of the divine feminine mother energy and the wisdom of man and animal. He is the significator of auspicious new beginnings and the bestower of intelligence and wisdom.